To trophy or not to trophy?

That is the question.

Hi everyone. It’s Missy here from @hopegaming and I have been a prolific gamer since the age of 9 when I started out on my Amiga 600. Oh yes, those were the days of pixelated goodness and it would make me older than I look (31) I had a particular fondness to racing, adventure and puzzle games. There was limited multiplayer back in the day and I had to complete objectives on my own often with limited lives, save points and achievements. It was simply the thrill of playing the game and repeatedly doing so until you mastered a level or a race.

So what happened? I grew up, granted and I discovered alcohol and Ibiza. So my PS2 gaming days are hazy and few. Since then it has come full circle and now money is tight I find myself gaming more often but there is an addition. Trophies.

Not ones that can sit on my shelf or the few I won in my school days but the joy of hearing that ping, ping. The flash on the screen to say you have earned another trophy or you have completed a full set. The first trophy game I ever played was PixelJunk Eden which was released in July 2008. This was consequently the first game to actually have PlayStation 3 trophy support.

Personally this has changed the way I game and although I will not aim for a trophy from the outset i.e. I will not look at the trophy list and then play the game just to get the trophies. I will play the game first and then re-visit it to pick up any trophies that I may need for the full set and the platinum trophy. This is fine but I don’t then play the game again even if i have enjoyed it immensely. I will move on to the next game. Perhaps this is normal now that I have more commitments in life but it’s not how I used to play back in the day.

Now you may think this is a bit geeked out on my part. After all what I am getting out of it apart from my own satisfaction and that’s all it is for. I am a perfectionist as my star sign (Virgo) would suggest. Also I have about one Lego game in my collection and that is as low as I would stoop but some take it further. Anyone up for Hannah Montana?

Some in order to be number 1 will have multiple users on the same account. I am not entirely sure if they take shifts and hack it out 24/7 but they must spend a lot of time and it’s a little worrying how addictive it is to some people.

You can tell by the popularity of trophy sites that it is something that people really care about and sometimes unhealthily. From personal experience when I did need help with an Assassins Creed Brotherhood trophy which was a pain to get (Abstergo Employee Of the Month), I asked for help and we basically boosted it. It took some organisation and was frankly annoying to find people to do it with and to get everyone working from the same hymn sheet. Now why I did I go to this effort? It’s just because I wanted 100% and the platinum on my list. Does anyone actually care?

If you think this was sad of me then take the Assassins Creed Brotherhood multiplayer. I enjoyed it so I played it normally and got to level 50 naturally but some people who had not even played the game will immediately get a group of people together to boost the online without even have played it. This I don’t understand. Gamers encourage themselves to cheat which I am sure is one of the main reasons that Call Of Duty has few multiplayer trophies discounting zombies. Can you imagine? It takes away the fun of discovery rather than playing the game and enjoying it as it should be. “Trophyitus” should perhaps be an official medical term. The unofficial trophy addiction gamers seem to have. This brings a whole load of negativity to gaming. It’s like a bi-product.

People are encouraged to boost and cheat in games. I held my hands up I didn’t harmfully do it nor was it online with other random people who were unaware of our trophy boosting but I did it for a trophy, taking away the real way the game should have been played.
Perhaps as an argument we should be looking at the developers for not making the trophies impossible / easy to achieve but where would the happy medium lie? Or just do away with online trophies altogether. I have never played Resistance 2 but the 10,000 online kill trophy seems to be the one I have read about the most. 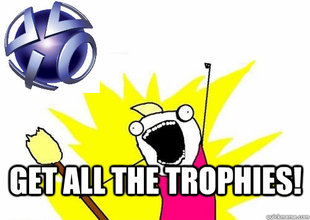 Your trophies don’t account for your gaming skill. People seem to get inflated egos when they have a large amount of Platinum’s or a high trophy score. Whilst I get respect from some gamers for being a “girl gamer” who plays real games based on my trophy list. Others seem to think that it makes a difference to how good a gamer you are when in fact it just shows you sit in front of the telly a whole lot longer.

Trine 2 is a pretty little side scroller and paved the way for new game developers to have their games reach a global amount of gamers on multiple platforms but it has a bunch of easy gold trophies and I mean they require no effort to get at all. Potentially you don’t even have had to played the levels in Trine 2 as you can join a co-op partner who has completed the levels and just have all the levels unlocked yourself. You can then get all the trophies and platinum for this game in a few hours, if not less.

Rubbish games are accepted or manipulated by trophies. Terminator Salvation 12 golds. That is all. Surely in the gaming industry if you add more easy trophies to a game it will actually be beneficial to the sales of that game and if they are easy or top scoring well it spreads like wildfire on the Internet and makes money even through rental sales.

I personally like to play a variety of games and gaining trophies is just an addition for me. Thanks for reading, Missy

The only reason I play games to get trophies to know that I’ve completed that part of the story. If I didn’t get a trophy then that means that I’ve missed something within the given section and I’d go back and try and see if there needs to be a trophy. Another reason I go for trophies is to gain more just because I like the ping noise. Once I’ve completed the game, not to 100% but the story then I focus on multi player if it has one. Lil_Elf_93

I will put time into multiplayer gaming and I certainly won’t deny that I love ranking up, however I don’t seem to get the same sense of achievement getting a trophy in a story mode. Gaming is now much more than playing a game, in multiplayer it’s a social experience, where you can play and take on friends and I would prefer to buy a game with a shorter story mode and a longer more developed multiplayer any day. Jenxy

Are you For or Against? Sound off below