What a day to be a Mario Kart fan ay? Firstly Super Mario Kart released today (27th August) on the humble SNES in 1992. Who knew the game would become what is it today (Nintendo probably did). Mario Kart 8 sold over 2 Million copies in just a month earlier this year, which further confirmed just how important the franchise still is.

Secondly Nintendo has finally announced its plans for it’s promised DLC for MK8. And it certainly did not disappoint. The first pack, which will release in November, will include Tanooki Mario, Cat Peach, and LINK, four new vehicles, and eight courses. One of those new vehicles will be the Blue Falcon from F-Zero. The second pack, coming in May, includes Villager, Isabelle, and Dry Bowser, plus four vehicles and eight courses. If you purchase both, either as a bundle or separately, will also net you eight differently coloured Yoshis and Shy Guys.

Nintendo you had me at Link.

To celebrate what is an exciting time for the franchise, I thought I would put down a few of my favourite tracks throughout the series.

Mario Kart has and always will be a game that costs you friends and sometimes family. Baby Park was a level which seemed to promote this all too much. It’s simplicity (it’s just a loop) meant it was the instant go to race in double dash. The emphasis on weaponry in that game also meant it was pure carnage, the giant items found in that game also meant you really was never safe on this level. Even a far off lead could be cut short with just one giant unavoidable shell (damn you bowser) or giant Banana (piss off Donkey Kong).

This was mine and probably millions of others first introduction to Mario Kart. I was only just starting out as a gamer and I have fond memories of older family members having me in tears as a red/green shell put me even further into back of the pack. It was a simple course (with a few sneaky short cuts) that fully let you know just what Mario Kart was going to be all about. I have still nightmares of being “lapped” on this level and the odd pity win I’d be given, in some rare moments of humility from family members.

By the time Mario Kart 64 came around I was officially a gamer and probably at my peak of gaming skill, mostly due to childhood free time. Wario Stadium was certainly my favourite level, mostly due to its scope but also because I had a love of all things Wario at the time. It was also a level which really showcased the raw power of the N64, racing in full 3D felt right and some of the jumps in this level still make my heart stop. If you’re one of those people who saves a shell or banana to use just before or during a jump, then you’re a monster.

This is a level that a lot of people missed due to not playing Mario Kart DS. It’s taken a re-release of the track on Mario Kart 8 to wise people up to it’s awesomeness. Mario Kart has always been a game about luck and this level oozes that principle. Every 45 seconds the gears on the level change direction, this can either hinder or aid your speed in a race. It’s still amazing having to argue with people new to the track that it’s NOT “rigged”. 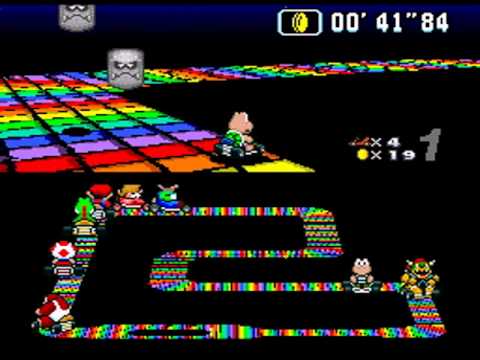 This had to be my final choice, the original Rainbow Road will always be the course which defined you as a racer. If you had this course mastered, you were pretty much godly (well in my household anyway). The unforgiving nature of Mario Kart was on show here, if you had a bad start (usually due to being barged off), there was little to no chance of you coming back. And frustration usually meant that you fell off the course even more. But even with the sheer lack of walls on this course, it still felt fair and thankfully Mario Kart still always has.

And there you have it, those are my top courses. Do let me know if I’ve made a glaring error and missed out an epic course off of the list.